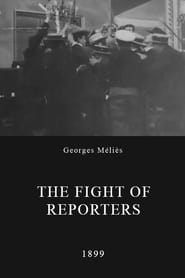 The Fight of Reporters


During an interval in the proceedings of the court martial, the journalists enter into an animated discussion, resulting in a dispute between Arthur Meyer of the 'Gaulois', and Mme. Severine of the 'Fronde', resulting in a fight between Dreyfusards and Anti-Dreyfusards, in which canes and chairs are brought down upon the heads of many. The room is finally cleared by the gendarmes.
Status: Released IMDb
Release date: 1899-01-01
Run time: 1 minute / 0:1
Director: Georges Méliès
Production Company : Star Film Company
Production Country: France